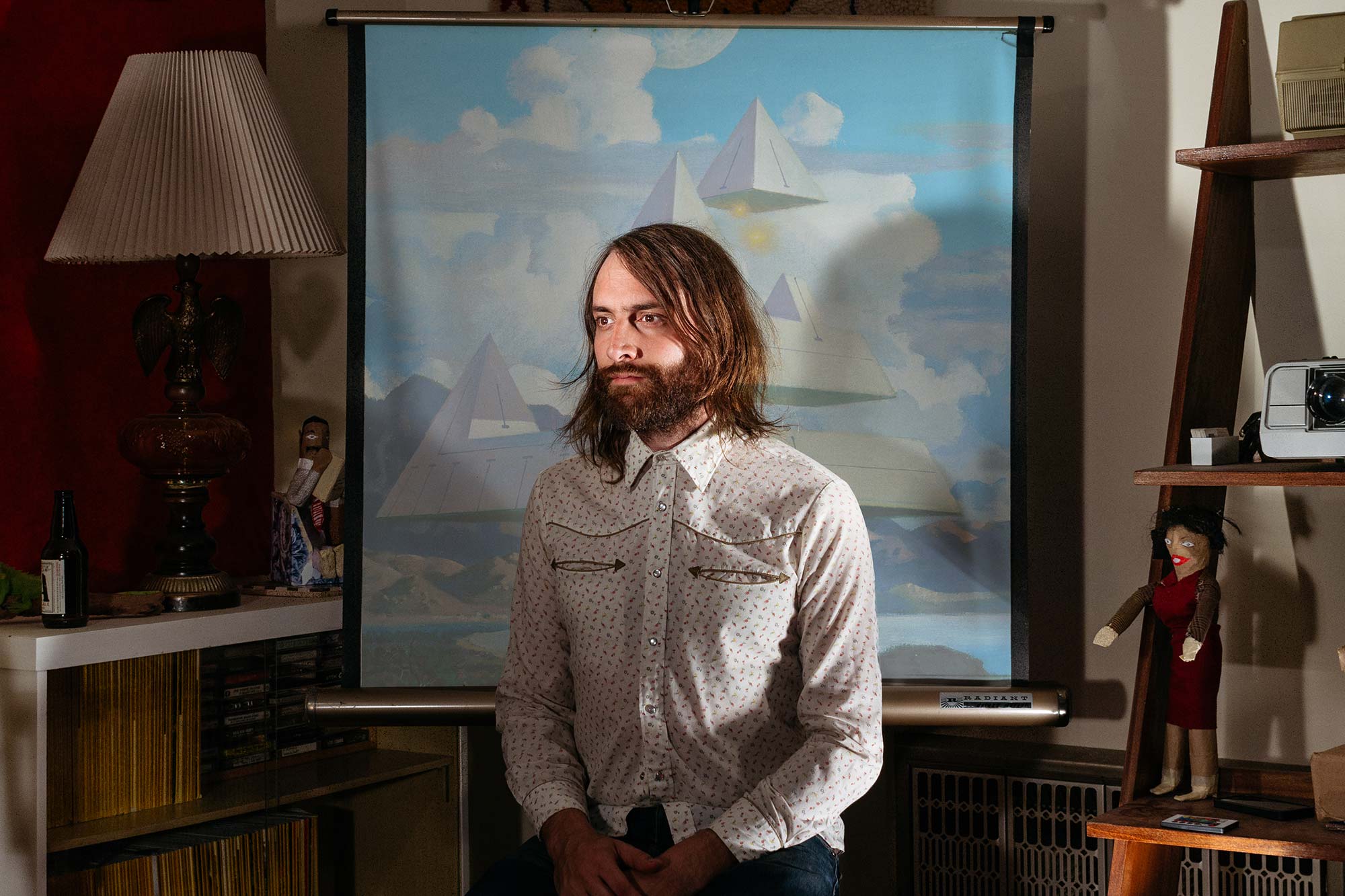 “[A] net of eccentric sounds and dreamy vocals paint a picture of a vivid cosmic journey to come.”

For the last decade, James Wallace & the Naked Light recorded and released music from the fringes of Music City USA, touring all over with a singular vision and purpose. All the while, James Wallace’s name figured in as a trusted companion to a few scenes in particular: the Spacebomb sound coming out of his hometown Richmond, Virginia alongside old friends Natalie Prass and Matthew E. White; inside the new Nashville “underground:” where his bands’ magnetic performance listed them as a favorite among Alabama Shakes’ Brittany Howard; producing records, occasionally filling in on keys with cult-treasured Promised Land Sound; and roaming with the Oakland collective of songwriters centered around a converted school bus who travel under the banner “Splendor All Around.” But now the name is Skyway Man. Solo tours in Japan and China, a new batch of songs intertwined with his fascination with UFO religion, signaled a shift in direction. His inner mercury nudged him toward a new role, and the name Skyway Man rose to the surface again and again. Was it the trickster of mythology, the soul of some eternally missing astronaut, or the old singing storyteller trying to get through?

Wallace possesses a knack for getting caught up in outlandish events – discovering a trove of mysterious letters written by a Ufologist to a woman, describing the New Jerusalem and the 4th dimension, or months spent playing Mahjong in a smokey trailer behind Opryland, working as a Mandarin interpreter for Chinese Ice carvers in Nashville. This knack also extends to orchestrating outlandish events, getting interesting people on board in his endeavors–sweet-talking the flow of life into altering its course. Time for a new name and new record. Seen Comin’ From a Mighty Eye is a dense undertaking, recorded in different locations, simmering influences, channeling all the correct energies, paying the people and spirits who need to be paid, finishing the work the right way over the slow course of time. He recorded the last Naked Light record in Matthew E. White’s attic, and returned to that revered spot to track this new psych opera about strange futures, haunted pasts, and the Mighty Eye in the sky. Spacebomb house bassist and composer Cameron Ralston provided the horn arrangements and Spacebomb house drummer Pinson Chanselle sat at the kit. Wallace sang, compiled and mixed back in Nashville. It’s the usual stew of B-movie scifi, cosmic American boogie, psychedelic folk and it’s apocalyptically good, focused and potent, an immersive fully realized song cycle and visionary sonic structure.

From his modest rancher in Bordeaux on the Cumberland River, the lights of downtown Nashville are visible at night, shining sweetly or casting a lurid glow depending on atmospheric conditions and the viewer’s mood. Music City is changing fast, but James Wallace is invested in its community and spirit–the true believers, auteur session aces and acid cowboys and cowgirls who need each other to survive the sweltering industrial music machine. Skyway Man transcends this landscape, tapping into an older, more spiritual commerce. Seen Comin’ From a Mighty Eye offers the kind of music you would want on the radio for a first or last kiss, the incidental music from some forgotten Spielberg adventure, a soundtrack for the later (not quite latter) days of earth. If lightning strikes and the car radio explodes, it might just be part of the track. Music for driving along the skyway, and thank god the skyway is made of music anyway.